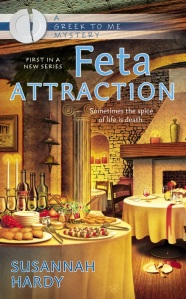 Book 1: Feta Attraction
Georgie Nikolopatos manages the Bonaparte House, a Greek restaurant and historic landmark in beautiful upstate New York rumored to possess ghosts and hidden treasure. But when her husband disappears and her main competitor is found dead, it’s up to Georgie to solve a big fat Greek murder.

With her husband, Spiro, inexplicably gone for days, Georgie has her hands full running the restaurant and dealing with the crew of the TV show Ghost Squad, called in by Spiro to inspect the house for haunting. So when she has a chance to take a boating excursion on the St. Lawrence River with her friend Keith Morgan, she jumps on it. But their idyll is quickly ruined when they discover the body of rival restaurant owner Domenic “Big Dom” DiTomasso floating in the water.

When the police start asking questions, it doesn’t help that Spiro can’t be found—and with Georgie on their suspect list, it’s up to her to find her missing husband and find out who killed Big Dom before someone else’s order is up. 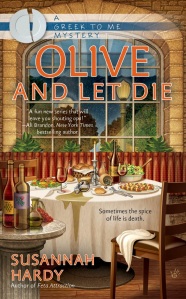 Book 2: Olive and Let Die
As manager of the Bonaparte House, a historic landmark and Greek restaurant in upstate New York, Georgie Nikolopatos knows her local legends—and her traditional Greek recipes are to die for.

Between her soon-to-be ex-husband Spiro coming out of the closet and her budding romance with Captain Jack Conway, Georgie’s life is beginning to feel like a soap opera.  And that’s before a surprise visit from her estranged mother Shirley, better known as soap star Melanie Ashley. But the dramatic family reunion takes a chilling turn when another long-lost relative turns up dead.

Just outside Spiro’s new restaurant, Georgie and Melanie find the body of Doreen Webber—a cousin Georgie never knew she had. With Spiro’s partner Inky on the list of suspects, Georgie begins to wonder what else her mother may be hiding. Is the dead-broke diva capable of murder?  She’d better find out before someone adds a new twist to the family plot. 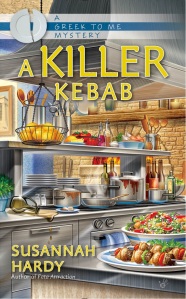 Book 3: A Killer Kebab
The Bonaparte House is closed for the season, and Georgie Nikolopatos looks forward to fixing up the Greek restaurant and historic landmark—until her renovation plans hit a fatal snag.

With her divorce underway, her mother-in-law returning to Greece, and the tourists gone, Georgie finally has life under control—and the Bonaparte House to herself. She quickly hires a contractor for some much-needed renovations to reopen in time for a special Greek-style Thanksgiving meal. Georgie is suspicious though when former dishwasher Russ Riley arrives with the construction crew. He still has an axe to grind with the Nikolopatos family—but is it sharp enough to kill?

When Georgie finds the body of her divorce lawyer amid the construction debris and Russ is quickly arrested for murder, something about the case doesn’t add up. While Georgie is no fan of Russ, even a bad egg deserves a crack at justice.